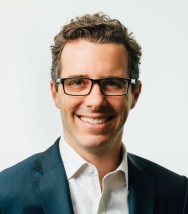 Prof. Frank Gaillard is the Founder and Editor in Chief at Radiopedia. In his clinical practice, he is an academic neuroradiologist and Director of Research in the University of Melbourne Department of Radiology of the Royal Melbourne Hospital, Australia.

Radiopaedia is well known in the medical profession worldwide as a go-to resource for imaging. Can you tell us the story of how it developed into what it is today?

Wikipedia, believe it or not, was my inspiration. It all started when was I was studying for my board exams. My wife (also a radiologist – and much more of an overachiever than I am) was studying a lot more than I was, and I was starting to get lonely and bored.

It was at a time when Wikipedia was beginning to become important. Now we take it for granted, but back then it was unbelievable that their model was working- an anyone-can-edit-anything site, where nobody gets paid! I find it incredible how out of that extremely bottom-up approach, you get something that not just rivals, but now surpasses any professional, curated, expert-only resource such as Encyclopaedia Brittanica or Microsoft Encarta.

I contributed to Wikipedia for a while but what I found frustrating about Wikipedia (or any general encyclopaedia for that matter) is that the content has to be as broad as its target audience. Wikipedia’s target audience was too broad for what I wanted it to do, which was something radiology focused and aimed at medical professionals.

In 2005 I cobbled together a Linux server from bits of computers that I had lying around at the time and taught myself enough Linux to get it up running using MediaWiki – the same content management system Wikipedia uses. From the very start, Radiopedia was open to be edited by anyone. But of course, for ages, nobody knew that existed!

From then, a couple of things happened that were down to luck.

First, I found one of my contacts from Toshiba Australia (Maryanne McHugh) who was visiting my hospital, and she was able to pony up a little bit of cash to start. It was a tiny amount – matter of fact, I think we spend more than that each month on bandwidth now – but at the time it felt pretty big. Second, a good friend of mine who’s from an IT/engineering background started his own Ruby on Rails coding shop and was now looking for work. This was 2008, and the first images on Radiopedia.org soon followed.

Wikipedia, believe it or not, was my inspiration

Did you encounter any problems in these early years as you began to expand it online?

There’s been many many problems along the way. We went through periods where we had no funding and we were just scraping by, keeping the lights on. Many periods where we were putting in personal funds just to keep it going for a while, hoping that it would turn out ok. Now it’s self-sufficient so I don’t have to put any of my personal cash in.

Any tips for getting through the tougher times?

There were times when there weren’t any contributors and it felt like it may have all just been a monumental waste of time and shut down, leaving just a bunch of legacy code that wouldn’t be useful to anyone. I like to think about these times in terms of studying for an exam. Every exam you study for generates an enormous amount of personal notes, which are, I guess, legacy code that isn’t useful to anyone. So you just have to make the process worthwhile. If the end product doesn’t work, at least you have learnt from it. The longevity of the end-product is, as I see it, just an added bonus.

So you just have to make the process worthwhile. If the end product doesn’t work, at least you have learnt from it. The longevity of the end-product is, as I see it, just an added bonus.

It is clear that Radiopaedia is driven by a vision for educational excellence through freely distributing knowledge, and not simply for making a profit by providing a professional resource. How do you achieve a balance between the two?

We are nominally a for-profit organisation, and one day I look forward to thinking back and saying “Hey, those 20,000 hours of time I put in during the prime of my life paid off!” would be lovely. But a fairer description would be a ‘not-very-good-at-making-a-profit’ organisation, because it hasn’t really been our priority.

To be honest, if the aim was to create a commercial success with the site, a) it wouldn’t survived b) I’d be very depressed right now! Commercially, many decisions would have had to been made very very differently. At the minimum, there would be ads all over the place. Ads can be a pain for many reasons, but it’s what allows the site to exist. We want to do right both for our users and those supporting us by advertising. The only reason those supporters are putting in advertising money into the system is because it gets shown to the right people. You can change the incentives and models at various points, but unless you want to put the whole site behind a paywall, you either have to find a few individuals to donate a huge amount of money (very difficult and never without other constraints and motivations) or you get a lot of individuals to pay using their eyeballs (on ads) or donate by small amounts. We have gone for a hybrid – we’d like more and more people to become supporters, and we’re offering better and better perks for them. Just recently, we’ve made it possible for institutions to become verified, and that unlocks the ability for users within an institution to be grouped together or for their institution to become supporters on their behalf.

You are almost ten years on since the beginning, by this stage, some founders may have sold out, have you ever had any thoughts about selling Radiopaedia?

Sometimes people do ask me: “would you ever sell Radiopaedia?” The real question though is: “who would buy it?!” The only people who would want to buy it would want to monetise it and put ads all over it – and I couldn’t let that happen to the website. I wouldn’t be able to sell it unless I could put all sorts of restrictions to ensure that all the contributions made by people and all the benefits that people from low- and middle-income countries derive from it would be protected. And those constraints are exactly the same constraints that stop us from making a whole lot of money.

So I think it’s destined to remain – and this is a good thing – as a site for and by the community. In fact, one of the great things about the site is having all these people you consider as friends, all over the world.

If you were to now turn back the clock to the time when you were just starting what would become Radiopaedia, would you do anything differently?

That’s a good question, and I think there are answers at different levels.

At a smaller decision level, I probably would not have made an iOS app. I coded the first iOS app myself. My wife and I did our second year of fellowship in Canada. When my wife was doing her third year of fellowship, I decided I’d had enough of fellowships and took a year off. I spent that year playing PlayStation and working on Radiopaedia. During that year, I taught myself enough Cocoa to put up an app. I still had a first-generation iPhone back then, around 2008/2009. Smartphones were looking like the next big thing and everyone was putting out their apps. At the time you had to develop either as a web-app (where the performance would be pretty bad) or you can run as a native app for Android or iOS. I decided to go with the latter, and this was just before everyone changed their mind as to what was best! So I had actually got a professional to re-do the app for me, and it cost a phenomenal amount of money – I’m not sure if it has even now broken even. It’s still out there, but we haven’t recently made any new content for it, and we probably won’t in the future. Since then, everyone has generally tended towards putting their effort in making their site responsive for all devices, because the number of devices and screen sizes has become unmanageable for most projects, and not to have a dedicated app. Realistically that sort of money would have been better spent on the website itself.

Finally, would you recommend being an entrepreneurial medic?

If I could go back, I’d certainly do it again, but it’s a good thing I didn’t know back then what I know now, because I may not have had the heart do it! It is definitely a job, and it’s a job with stress and commitments – it’s not something I can walk away from anymore. I haven’t had a holiday in about ten years without answering Radiopaedia emails and putting out fires!