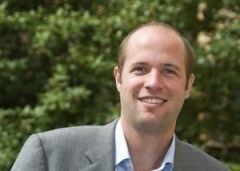 Jonathan is a qualified surgeon and Executive Director of DocCom. He completed his medical training in Bristol, between 1995 and 2000. Following house jobs in the Southwest and an anatomy demonstrator post in Oxford, he completed his surgical training in Bristol, gaining Membership of the Royal College of Surgeons. He then embarked upon an MD doing research in the field of vascular surgery.

During this period, while still practising clinically for part of the week, Jonathan began to question many of the established and accepted ways of doing things in healthcare. Along with his clinical colleague, Jonathon Shaw, he developed a vision for a better means of communication and collaboration amongst healthcare professionals and together they cofounded DocCom in 2007.

DocCom, founded in 2007, offers secure cloud-based enterprise networking for healthcare professionals and organisations. It provides a platform through which those working in healthcare can connect and collaborate with others and promotes increased productivity, efficiency, safety, engagement and improved outcomes. Current partners include Microsoft, the National Patient Safety Agency, The Severn Deanery and University Hospitals Bristol NHS Foundation Trust. The company currently consists of a team of 15 and is continuing to grow at a rapid pace. In recognition of Jonathan’s guidance of DocCom he was a finalist in the 2010 IoD Young Director of the year awards.

Here Jonathan talks about his entrepreneurial journey so far as well as his vision for the future of the company.

Jonathan, can you talk about what led you to leave clinical training to found a company?

Well, at the time I was combining clinical work with research, as I had embarked upon an MD. It had become clear to me that the research lab was not for me and that I wouldn’t be taking my career in that direction. At the same time, I was a member of the junior doctors’ committee within my trust, so I had a lot of opportunity to hear about and discuss current issues and concerns amongst hospital medics.

I was acutely aware of the inefficiencies and difficulties in healthcare that arise due to poor systems for communication. Doctors were relying on faxes, pagers and outdated intranet systems. However, the rest of the world had moved on, with the advent of social networking, and healthcare was seriously trailing behind. I got talking about this with a surgical colleague, Jonathon Shaw, and thinking about potential solutions to this problem of communication in the complex organisations that make up our health service. We asked the medical directors of half the acute trusts in the UK about their systems for communicating with their junior doctors. 90% came back saying that they had no system in place to communicate with them. We could see a clear need for better technology and for a secure and professional ‘Enterprise Social Network’ in the healthcare system and decided we could do something about it. So we took something of a leap of faith and went for it!

So how did you get started?

Jonathon (Shaw) had prior programming experience. He’d developed various web applications as a student and cofounded studentfreeads.com. As a doctor he had also developed a number of database solutions for healthcare. This meant we started with a good deal of IT expertise from the beginning. We then pooled our resources, started speaking with people who could help, drew up a business plan – all alongside our day jobs – before taking the leap. That was back in 2007, so we’re 4 years old now as a company.

Initially we raised money through friends and family. Then we secured angel funding. Then venture capital, through a technology VC firm called Eden Ventures.

Did you have any business education before you set out?

Not formal business education. However, I think we all have many relevant transferable skills as medics. Something I’d say we lack training in as medics though are the softer skills – management and leadership skills, managing people, dealing with business situations and settings. Skills in these areas are highly important to be successful in business. They are best learnt by experience but additional training in these areas early on is no bad thing.

What is DocCom doing now and where are you headed?

We now employ 15 people and we’re about to take on a further 3. We also have a number of established partners and customers – we currently have 6000 users, but this number continues to grow. We’ve launched various social features and we’re using a viral strategy to grow numbers.

We’ve had a lot of recognition nationally which has been a great boost. We recently won a contract with Microsoft and we won their national BizSpark competition last year. We were featured in the Sunday Telegraph earlier this year as well as hospitalist news, and gained recognition from the UK Technology Strategy Board.

In terms of the future. We’d like to expand beyond the UK and we’ve recently been visiting the US and Canada to meet with people there and discuss a move into that market. We met with people at the Mayo clinic, which was fascinating, and Jonathon also spent a week in Silicon Valley not long ago talking with some of the renowned tech companies there. There’s a lot of potential for us over there.

What have been the highs and lows for you so far?

There have certainly been challenges along the way. Selling to the health service is frustrating. Anything to do with selling has negative connotations in healthcare over here so that has been hard. The highs –  probably the opportunity to meet so many interesting people along the way. Fascinating and inspiring individuals within the investor community, other entrepreneurs, even royalty (the Duke of York recently paid a visit to DocCom along with other companies at the Bristol incubator where they are based).

What would your top tips be for other medics interested in an entrepreneurial path?

Find a cofounder – its very hard to start a company alone. You need someone to weather the storms with you and keep each other going. You also need to be prepared to take some risks and get over your fears. Finally, you must be absolutely determined – the journey is not always a rosy one.

That said it’s exciting and liberating. You have the chance to make your own opportunities. Being amongst a culture of entrepreneurialism and innovation is a really different way of looking at and doing things.