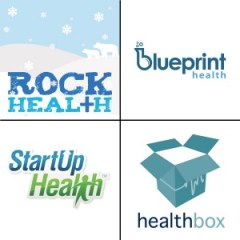 2012 is set to be a big year for new healthcare ventures. There’s a tangible buzz about the potential for technology – in particular IT, the internet and mobile – to drive a dramatic transformation in healthcare. With a rapidly growing network of entrepreneurs working on new health technologies, as well as increasing interest in the sector amongst the venture capital community, high-tech solutions in health are going to be a major theme in 2012.

Unsurprisingly, there’s A LOT of activity in the US and many of the articles I’ve highlighted are US-centric. However, there’s a burgeoning health-tech revolution happening over here in Europe and the UK as well, and on talking with the UK health IT companies I interviewed last year, they all reported a strong 2011 and are entering 2012 with confidence and anticipation of what’s to come!

So what can we expect of the sector in 2012? Back in November the New York Times shared their opinion on our High Tech Healthcare Future, whilst San Francisco-based healthcare seed-accelerator, Rock Health (the first of it’s kind to launch in the US: read what the press have to say here), provided us with a great roundup of Digital Health in 2011. The accelerator recently announced the 12 new startups that comprise the second cohort on their intensive 5-month programme. Their first cohort joined last year and pitched at the first Rock Health demo day in November, proving through their progress in that time the great benefits of having access to mentorship, support, funding and influential networks in a sector that can be notoriously difficult to break into. In fact, over the past year four health startup accelerators have emerged in the US, a trend which I imagine is likely to continue and hopefully spread outside of the US to Europe and the UK as well. Here Mohammad Al-Ubaydli of the Cambridge (UK) – based company Patients Know Best talks about why he invested in the NYC-based healthcare accelerator Blueprint Health.

This CNN article 12 entrepreneurs reinventing healthcare  is well worth a read as is Techcrunch’s list of 6 Big HealthTech Ideas that will Change Medicine in 2012. And if you’re looking for an excuse to head over to the US this year then check out some of these fascinating health innovation conferences: The Health Innovation Summit 2012, TedMED, the FutureMed conference and Health 2.0 (including a Berlin Conference in November of this year).

Closer to home, Bristol-based journalist, Nick Flaherty, described healthcare as “the bright spot in [the] struggling European venture market” – whilst Europe recorded the lowest number of VC deals in a decade during the third quarter of last year, medical startups were the one area that secured more deals and investment in the medical devices sector more than doubled. Venture Capitalist Julie Meyer, of Ariadne Capital, predicts that Healthcare in the UK is a sector we’ll be hearing from a lot in 2012, stating that it is ‘ripe for opening up’ – she picked out companies to watch, including Patients Know Best, TGS software, Weight Wins, and Genestack.

For an insight into some of the fantastic medical innovations coming out of the UK and beyond, check out the 2011 winners of the Medical Futures Innovation Awards. Medical Futures, started in 2001 by Dr Andy Goldberg OBE MD FRCS, consultant Surgeon at London’s Royal National Orthopaedic Hospital and senior academic at University College London, showcases early stage healthcare innovation, recognising ideas of clinicians, scientists and entrepreneurs. From thousands of entries the winners are chosen by a panel of distinguished experts and recognised at an annual awards ceremony held in London and attended by 700 leaders in medicine, business and politics.

In terms of Healthcare IT, this week I spoke with the founders of Patients Know Best, iWantGreatCare and DocCom to find out what their great gains of 2011 have been and what 2012 holds in store.

Jonathon Shaw of DocCom talked of their 2011 successes, including a “25% increase in users during the second half of last year along with increased engagement amongst existing users”. New DocCom networks and groups have been established throughout the UK and they recently signed a contract with Microsoft. In 2012 the company is set for further expansion and they have just begun their first overseas pilot of up to 600 doctors in Canada.

Mohammad Al-Ubaydli of Patients Know Best explained that the company began its international expansion in 2011 – “we just signed up our first US customer, and also our first partnership with a South African company, so customers will come from there in 2012 as well. This makes us the only global provider of patient-controlled medical records. We also started integrating with smartphone app developers. The first US app developer will unveil their asthma app in February 2012, and we have two others in the UK.  “

Neil Bacon of iWantGreatCare explained “2011 has been a landmark year for iWantGreatCare, with a continuous increase in users, reviews and revenues. Four new clients (both NHS and independent sector) joined in the last two months of the year – ensuring that revenues were up 100% on 2010.”

In terms of the year ahead? “2012 looks set to be the year that patient experience goes centre stage in the battle to improve quality across the NHS and create a service that becomes fully patient-centric. iWantGreatCare is set to play a major role in this transformation through partnerships with NHS providers and continued innovation. The website will be launched in another four languages, the first going live in January and our first major healthcare charity partnership is launched in the same month. The business is forecasting exponential increase in review numbers, partly driven by the growth in mobile internet access – with more patients using phones and iPads to share their experiences of medical, dental and pharmacy services”.

There are now several groups on LinkedIn for those interested in healthcare innovation and technology. This article lists some of the most useful.