From virtual reality, to art and chaos. From fighting and solving cancer, to beating ageing. From lab-grown blood, to digital organs. From 3D printed jaw recreation, to unlocking the secrets of the brain… No, you are not reading highlights from a science fiction book or magazine but perhaps, it can be argued quite easily that Wired Health 2016 was an event full of science fiction highlights.

Wired Health 2016 took place on the 29th April 2016 at the Royal College of General Practitioners and it was indeed ‘a captivating event exploring the future of health’. Wired Health heard from the innovators transforming and ultimately reshaping the future of healthcare. Molly Maloof, a health optimisation practitioner from Silicon Valley, stressed the importance of food as the best medicine but her innovative approach to prescribing new Instagram accounts relating to healthy food and five app recommendations including an app with boxed meal kits, made us question the role of pills in battling unhealthy diet. Jo Mountford is making billions of red blood cells on demand in a laboratory in Glasgow through her organisation named Novosang, to meet increasing pressures for blood. 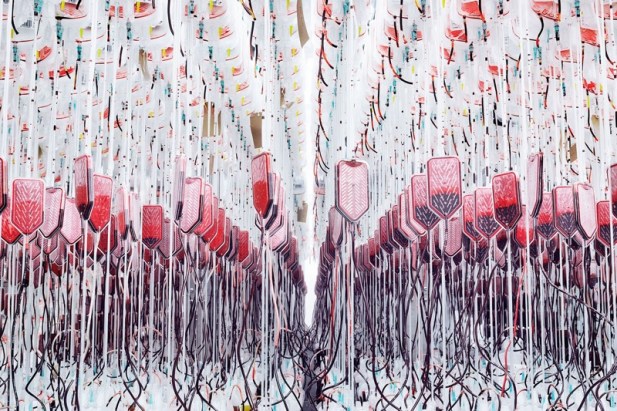 The NHS Blood and Transplant facility in Bristol, where donated blood is screened. Novosang is looking to make this process obsolete.

At 5159 miles West of Glasgow, in San Diego California, Craig Venter works on Human Longevity aiming to fight the impossible with the world’s largest and most comprehensive database of human genes; ageing. BGI Genomics CEO, Ye Yin, emphasizes the tremendous power and wealth of data hidden inside us highlighting the potential big secrets that can be revealed.

If the above few examples are not enough to convince you of what the future holds for healthcare, IBM’s Watson supercomputer would like to become ‘as ubiquitous as a stethoscope’ beyond winning US gameshow ‘Jeopardy’. IBM’s Kyu Rhee told the crowd at Wired Health that the biggest problem faced by doctors is the enormous amount of data – and ‘AI doctors’ is the ultimate solution. Virtual reality (VR) pioneer and the first surgeon ‘to invite the world’ in the operating theatre by live-streaming a surgical procedure in VR, Shafi Ahmed, transferred the audience to the operating theatre and took the theory a step further saying that it’s only a matter of time until we are introduced to robotic surgeons. Jen Hyatt shared with Wired Health crowd her drive for big numbers and why she founded Big White Wall in 2007. 3D printing could not be absent form Wired Health 2016 and its importance in healthcare was highlighted by Andrew Dawood through the jaw reconstruction of one of his patients; Josh Stephenson. 3D-printed bone is not as far as we think.

Lucy McRae made the Wired Health audience uncomfortable but her use of unorthodox materials to explore themes of extreme human experiences and response by the body left as in utter amazement. Of course, the theme of personalised medicine could not be overseen and Emulate introduced us to ‘organs-on-chips’ paving the way for the development of personalised medication. The ultimate complexity of the human brain was explored by Gero Miesenböck, professor of physiology at Oxford University, through optogenetics (genetic modification of neurones in the brain to become light-sensitive) and the impact of sleep and Vincent Walsh, professor of human brain research at UCL, through a new approach to learning; ‘we are carrying around with us the tools for learning.

Networking, innovative ideas, fruitful discussions, exciting start-ups and certainly, leaders – the Wired Health 2016 had it all. As entrepreneurs in the world of healthcare we can do no more than just develop our ideas and anticipate eagerly for the Wired Health 2017.